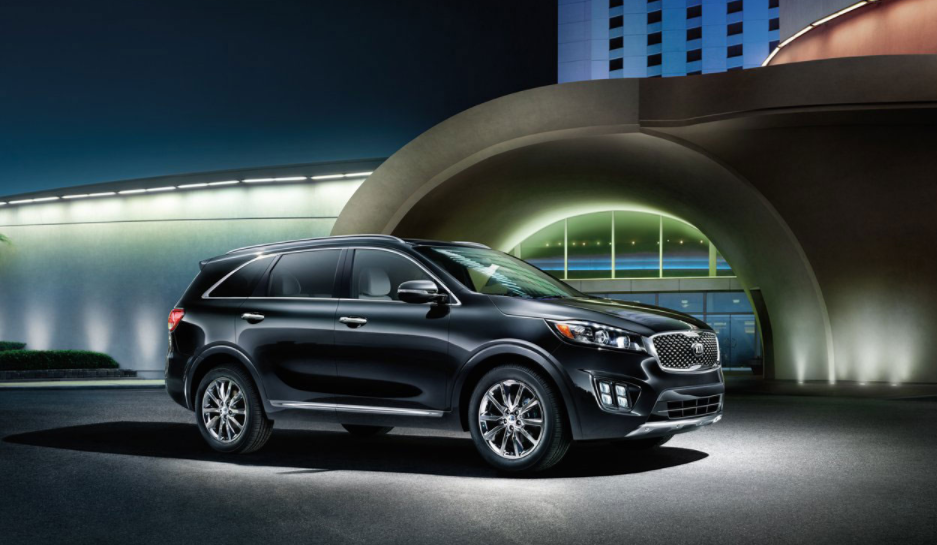 The 2017 Kia Sorento is one of the hottest and most popular midsize crossover SUV’s currently on the market. In fact, U.S. News & World Report ranks the ’17 model as the No. 1 mid-size SUV. It has tremendous marks when it comes to value, affordability, technological abilities, and safety. The advancements to the power of the vehicle offer much in the way of power, and the sleek aesthetic features help to give the Sorento a classy look.

The L model utilizes a standard 2.4L four-cylinder engine. It gets 185 HP with 6,000 RPM. When looking at the comprehensive slate of models made available with the Sorento, the SXL V6 is joined by the LX V6, the EX V6, and the SX V6 as having 290 HP. The LX mirrors that of the L (185 HP). The one model with it’s own individual trait is the EX — possessing 240 HP at 6,000 RPM. The potency of the V6 engine is quite impressive — as it offers considerable punch and acceleration. For its class, the gas mileage is also at the top of the field when compared to other competitors.

The front-wheel-drive Sorento models have a maximum towing capacity of 3,500 pounds. All-wheel-drive versions can tow 5,000 pounds. Essentially, the car has enough power to tow a smaller trailer. This facet will aide anyone with a business requiring the frequent transportation of equipment and materials.

The 2017 Sorento offers much in the way of diversity. One can personalize their individual car by utilizing many of the available options. Wheel-size ranges from 17 to 19 inches. The base L model includes 17-inch alloy wheels — though the LX also is equipped with a sound-reducing windshield and roof rails. As the model increases in price, there are added perks. In addition to the facets listed above, one could choose to obtain a model with a panoramic sunroof, LED interior lighting, LED headlights and taillights, and even LED fog lights.

The enhanced quality of the cab gives the varying models a regal feel. Depending upon the chosen model, the Sorento can seat five or seven people. While not given on the base model, ancillary amenities include heated front row and second row seats, ventilated seats, a power-adjustable driver’s seat, and a heated steering wheel. The interior cloth on the seating (should one not opt for leather) is soft, durable, and quick-drying in the event of a spill. The material helps to resist stains, and is also said to combat any odors that could emanate from passengers in the vehicle.

When compared to former models, the 2017 make has increased the legroom and knee room for those in the second row specifically. There’s also a feature which enables those with second-row seating to recline. As the premier SUV on the market, the Sorento is perfect for those with a family. The cargo space in the trunk lends to the notion of easily carrying sporting equipment, instruments, various boxes, and all sorts of miscellaneous items. There is roughly 38 cubic feet behind the second row of seats, and 73 cubic feet with all of the sets down. Additionally, for more expensive models there is an automatic liftgate — which is activated when standing behind it with one’s key fob. This works exceptionally well when carrying bags of groceries (for example).

Each model comes standard with traction and stability control, front-side airbags, front and second-row side curtain airbags, and anti-lock brakes. The LX model is the only one without a rearview camera. Rear-parking sensors are standard on three models (EX, SX and SX Limited). Should one want to increase safety measures further, there are many facets — including lane departure warning, adaptive cruise control, automatic emergency braking, forward-collision warning, and a blind-spot monitor with rear cross-traffic alert. A surround-view monitor is also available — which displays a bird’s eye 360-degree view around the vehicle.

The NHTSA (National Highway Traffic Safety Administration) gave the 2017 Kia Sorento a five-star rating for total front-impact protection, total side-impact protection, and overall crash protection. Duly, the IIHS (Insurance Institute for Highway Safety) issued a “good” rating for multiple tests — which is the top score any vehicle could get. Without question, Kia has done a fantastic job of providing potential buyers and current consumers the absolute best in safety measures.

The ’17 model is excellent when it comes to providing passengers with charging outlets. There are up to eight outlets for the models — including one 110v inverter, one AUX/USB port, two USB rapid-charging ports, and four 12v outlets. This especially comes in handy when taking a trip somewhere — or when one is in need of a quick charge before arriving at an activity or event. Bluetooth capabilities and satellite radio is standard in any Sorento model. Also made available is Apple CarPlay, Android Auto smartphone integration, and a 4.3 inch touchscreen audio display. A personalized connectivity exists with voice-command navigation. A generic plugging in of one’s smartphone (iPhone or Android) will allow for the driver to access applications, maps, and even sends texts from the display screen.

The 2017 Kia Sorento is an absolutely fantastic option for anyone looking to purchase a midsize crossover SUV. It demonstrates a safe, versatile, and stylish vehicle at a cost-effective price.